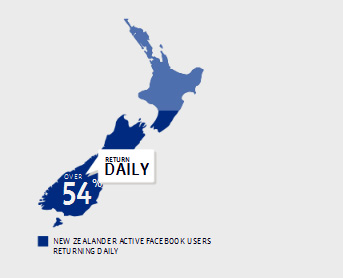 If there’s one thing that’s marked about New Zealand’s online activity, is the sheer dominance of Facebook over other platforms.

Facebook’s estimated New Zealand reach today was “2,100,220 people who live in New Zealand”, according to Facebook. The data also reveals over 54% of users returned daily – that’s at least 1,134,118 daily users of Facebook.

That’s a lot of people.

And they’re not just logging on – they’re participating. The data shows there are 15 million Kiwi wall posts made per month, 85 million comments a month left around the site, and 192,000 check-ins a month.