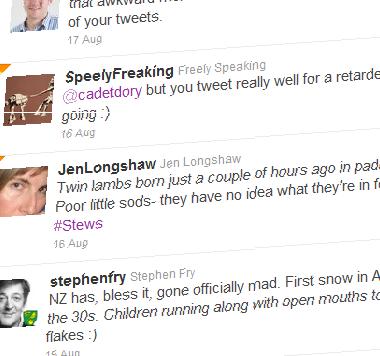 thisfog: How adorable is that little “Phew” sound cats make when you get your clothes back on after bathing?
AliIkram: Someone needs to feed the Cougars at the Viaduct before the RWC they might scare off the tourists

kittengloves Back to school lunches. Against my advice 7yo has made himself a gherkin and jam roll.
DomHarvey Mum to kid on street in Vegas: “FUCK UP!” Black woman within earshot of the encounter: “daaaaamn” I love America
rosiecd It is horrible to look at your child and KNOW you will have to bail them out of jail one day
lilyandalma Went out with a mcdonalds toy pinned to my head. Forgot it was there until I looked in a shop window. #mummyfail

Tarquin_Death New theory about the ongoing extreme cold snaps: Happy Feet is a penguin wizard making NZ more like his icy home
jackelder Snowing hard in Miramar at the moment. A number of world-class VFX artists are running around the carpark going “woooooo” and waving arms.
leahisaninja Dear New Zealand, Hello. Love, Antarctica. PS, whoosh.
stephenfry NZ has, bless it, gone officially mad. First snow in Auckland since the 30s. Children running along with open mouths to taste the flakes 🙂
JenLongshaw Twin lambs born just a couple of hours ago in paddock next door. Poor little sods- they have no idea what they’re in for. #Storms #Stews

farmgeek Forget young beneficiaries, what about all the retirees wasting their dosh on small dogs, finance companies and NZ First donations?

The Big Pink Fist of Abstinence

LachlanForsyth This abstinence stuff is going to ruin the fine reputation that generations of kiwi backpackers have worked so hard to create.
watershitdown i wonder if the pink fist will end up on trademe on $1 reserve

From the ‘are you serious?’ files

bookemdanno Seriously – limited edition rugby world cup nappies? Jesus H rollerblading Christ.
annagconnell 9 times out of 10, ‘Wakey Wakey hands off snakey’ is the first thing that pops into my head in the morning. Thank you Grandad.
jinnee79 Glad I managed to miss Dad and his friends at erotica. Coulda been awkward, they came Friday night.

From the ‘everything went better than expected’ files

brenasmith LOLs at our teenage neighbours planning the big noisy party last night. About 9pm they were looking munted and never heard a peep.
juhasaarinen Always feel surprised that I cheated death and injury after each Auckland commute.
SpeelyFreaking @cadetdory but you tweet really well for a retarded person. Good going 🙂
RobSuisted “Come around & we’ll take it out on a 12 year old” set me back a moment until I realised it was about scotch

vaughndavis My colleague in Switzerland has just confirmed she can make our meeting in Rome. I’m James fucking Bond, me.
sachalnf: Whoa. My brother just called me (on my cellphone) from upstairs to tell me to turn the tv off downstairs. LAZY.
mitchyyyyy There’s no honey for my toast. Brb crying.
richirvine I CHALLENGE ANY FECKER TO HAVE MORE CAT HAIR ON THEIR CLOTHING THAN I! I DO NOT THINK IT WOULD BE POSSIBLE!
robkidd that awkward moment when you realise someone actually read one of your tweets.

kiwieric Ah crap. My brain just Rick Rolled itself.
NanaJ9 It has become very obvious that my personality doesn’t actually start to formulate until that first cup of coffee in the morning.

Oh no, just been called, we’be been burgled. Holiday may be over.
Aiming to drive back tonight, police to fingerprint. I wish this was a joke. Think my wedding rings are probably gone.
Hey everyone, yes thankfully we have insurance. My wedding rings and meds are also safe. On our way home now.
Dear car in front, When the cop overtakes you then it’s a safe bet you’re going too slow.
Hmmm. We’re suddenly not spending a whole lot on accommodation. Perhaps a post burglary cheer me up pressie? Yarn? Maine Coon? Both?
If they stole the laptop, how long do you think until the discover the keyboard don’t work from a rat peeing on it?
Oh boy, another devastating thought….what if they found our “naughty” draw?
OMG they did find the naughty draw.