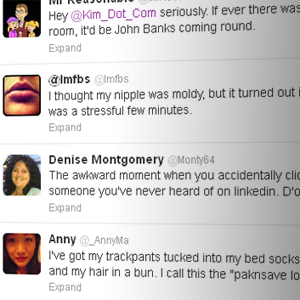 Here are the best Kiwi Tweets for April!

Bus Tweets of the month

16. @TroyRF 3 reasons this bus driver never made it into Snow White’s 7 dwarfs: 1. Too tall. 2. No beard. 3. Homicidey wouldn’t gel with the others.
17. @EllaJoanneM I’m both offended and relieved when a stranger doesn’t pick to sit next to me on the bus.
18. @Andrew_Scott The South Africans on the bus behind us were kissing, feeling each other up and saying how they are the best ever COUSINS. EWWW

19. @RachelRayner Eye cream and industrial adhesive should come packaged in distinctly different tubes
20. @Matt_Gibb Drove to work yesterday. Wish I’d remembered that when I caught the bus home after work. Just realized
21. @TophHooperton Accidentally splashed water on my crutch just before leaving the house then immediately ran into someone I know. Didn’t piss myself. DIDN’T.
22. @_AnnyMa And that, people, is why you must know the difference between ‘colon’ and ‘cologne’.
23. @not_friends Talking about boyfriend in code so I don’t ruin his game with Twitter babes either makes me the best girlfriend ever or touched in the head.

24. @Nightwyrm It’s okay that I’m not wearing pants while repeatedly watching the new Dark Knight Rise trailer, right? No-one on this train seems to mind.
25. @chandalier Trying on shoes in a shoe shop and random old guy about 80 not out says “give me some wine and I’ll drink it from your shoe”. WTF
26. @lmfbs I thought my nipple was moldy, but it turned out it was just towel fluff. It was a stressful few minutes.
26. @JessEtheridge You could feed a small village with the amount of food my bra catches.
27. @Brian_NZ I just ordered a long black, and was asked what size I wanted. That’ll teach me for ordering coffee in a mall.
28. @pinkdeedle My friend clare is telling me all about her dying uncle and i really need to wee but cant
29. @kirsty_johnston concerned that the sanitary disposal units at work are actually robots. our one looks like R2D2, continually pops up unprompted. frightening
30. @DanielRutledge There’s a bunch of dudes on queen street in orange vests asking for donations but not saying what for. One has ‘West Side’ drawn on his top.
31. @AnnaGConnell Just yelled ‘Clevedon rocks’ out the window. In Clevedon.
32. @JonathanJCarson Is 11:30pm an unreasonable time to bust out the guitar and have a sing-song? My neighbour doesn’t seem to think so.
33. @Pete_Robson Pak’n’Sav moment… Kids eating chocs straight from bulk bins. Parent sees. Tells them off. Takes Lollies from kid and eats themselves

34. @wenuwish Went to change into my PJs and then realized that I never got out of them this morning.
35. @_AnnyMa I’ve got my trackpants tucked into my bed socks, my fluffy hoodie on, and my hair in a bun. I call this the “paknsave look”

36. @rosiecd Mr 6: “ew boys don’t wear pink jackets! Although, if I was a good puncher I would wear one”
37. @mariamajsa Can’t help feeling Rhys Darby missed a perfectly good opportunity to call one of his sons Abu and the other one Roller.
38. @Becs Were you at the Wynyard Quarter today? A nude child, a unicycling girl & a pirate on a clown’s bike. Yes, they were my children.
39. @KATEHAWKESBY Words you never want to hear when a child wakes you at 2.30am: “I’ve vomited. It’s everywhere.”
40. @AliCopeman MissG(8) just asked me “is that exactly what Tom said or are you paraphrasing?” When I retold a story… WT…

41. @MrReasonable Hey @Kim_Dot_Com seriously. If ever there was a use for a panic room, it’d be John Banks coming round.
42. @mikokiko Thank you to whoever chalked “Tony 2012 – he must be stopped” in giant letters on the waterfront. Early morning Lols Ftw.
43. @BoganetteNZ I bet when John Key has sex he looks in the mirror and waves. Like Patrick Bateman but way less hot, and way more dangerous.

Congrats to Boganette for collecting the most votes and Floppie for winning the random draw, and thanks to Old Mout Cider for the lovely prizes!