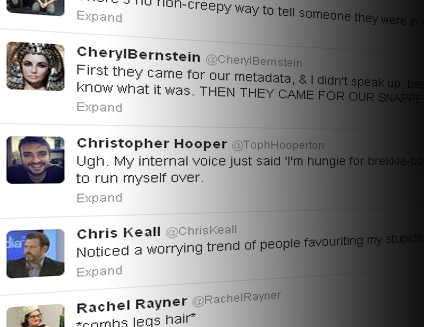 August was a busy month on the Social Media front. We certainly weren’t short of topics to discuss, nor things to whinge and joke about. This was a month of botulism scares and creepy government spying agencies. There was ‘BatFleck’, Shearer got the flick, earthquakes and marriage equality, just to name a few. We also managed to dedicate some tweets to observing and pondering the intricacies of our own existence. We affectionately laughed at family members and were (sometimes quite alarmingly) honest about our day to day lives. Here are a few of my favourite tweets from the month of August;

We’re nothing if not honest…
@SWTGallagher I think the closest to joining the mile high club I’ll ever get is having sex in the airplane at Taupo’s McDonalds…
@alexkc Going to walk into this party like I am walking onto a yacht (will wear my stepdad’s lifejacket and scream until somebody holds my hand)
@AceMcWicked That fart was so nasty that on a slower news day it would have made the front page.
@EstherMacIntyre Tried the intermittent fasting diet. At 3.30pm, ate flatmate’s toast out of the bin.
@mcquillanatorz I don’t date anyone who has less than 100% positive feedback on TradeMe #noscrubs

Nothing stranger than family…
@CyrisXD My nephew is scared of thunder. I told him that was silly considering the sun could explode any day, killing us all. I think that helped
@AceMcWicked I incorrectly claimed my cat as a human dependent in my tax return #incorrectly
@CaitlinSomers “If I could be an animal I’d be a duck – ducks can bite fingers off” sooo my brother is a sadist

Sweet and Sour Milk…
@RFStew New Zealand. The land of (tainted) milk and (fake) honey.
@ColeyTangerina my bf just came home to drink a milkshake I made which means Kelis is science.

Honourable employment…
@toryhipster Just read a Danish sonnet from 1690 about a dude jacking off. Seriously. Counting this as work. #bestjob
@NateNauer Sometimes people mistaking you for the bouncer is a good thing. “$20 cover charge please”
@BetterWorkStory An unemployed (and previously convicted) sex offender smoking a joint just told me to “get a real job.” #nzpolice
@Atomic_Moog This breach of the office chocolate biscuit policy is threatening to boil over.
@rents1 Been a lot of talk about ninjas at wk this week. If I hadn’t picked my current career that was my 2nd choice.

Critical appointments…
@edmuzik will throw my weight behind David Cunliffe if only so we can use “Son of A Preacher Man” as the 2014 campaign jingle
@RockYourBoyce Wait…Bruce Wayne was Batman?!
@AliIkram Politics is such a tough profession. One day you’re waving around dead fish in the house of representatives. The next u r gone.

The government  made it legal for Uncle Sam to become Big Brother…
@AntDCat Nixon bugged a hotel and subsequently resigned from office. Obama bugged the entire world and shrugs it off.
@TaikaWaititi Oh Mr Prime Minister, Al Qaeda is living in NZ now is it? Well in that case, yes, I permit you to spy on me while I surf the titty sites.

Marriage became a right for all! And God responded in fury with earthquakes and shit…
@ColeyTangerina Apparently a plane was struck by lightning landing in Auckland? God is really enjoying punking all the fundies on #MarriageEquality day.
@jtclassic Good luck to the same sex couples getting married in NZ today! May yours last FAR longer than my shitty straight marriage did #loveislove
@ferrouswheel What’s the most earthquake strengthened pub in Wellington? #eqnz

The Runners Up…
@joesomething_ I’m having trouble distinguishing between someone who does crossfit, and a crazy Christian preacher standing on Queen St.
@MsBeeton I don’t call it lying down, I call it landscape mode.

And the winner is…

@gtiso Billions of years from now the universe will reach heat death, and all that will be left will be a couple of grudges I’ve been holding.

@gtiso please follow our friends at @OldMoutCider to collect your delicious prize! And thanks to Ani for compiling the tweets this month! – Cate