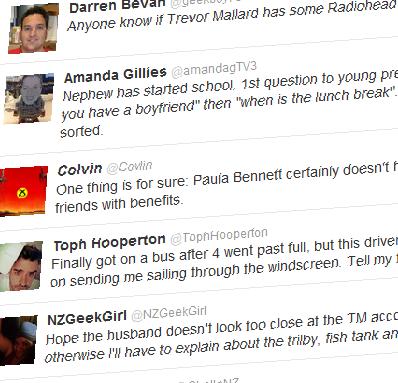 February. The month that had an extra day, there was Valentines, and my friend had a baby. Cats are awsome and so are owls. Here are your Kiwi Tweets of the Month…

Twitter people be herp derp
@guywilliamsguy I can’t believe borders went bust! I used to spend ages there reading magazines and never buying anything.
@DanielRutledge While taking a break from writing up my Mass Effect 3 interview I won a sweet pot in online poker just as a sweet new trance track climaxed.
@NZGeekGirl Hope the husband doesn’t look too close at the TM account, otherwise I’ll have to explain about the trilby, fish tank and rabbit.
@amiewee I photographed a lot of genitals this weekend
@BexieLady House smells like chocolate and mint butter cookies. Lessens the rage.
@pinkdeedle May or may not have used a Libra Maxi Pad with wings to stop headboard wrecking wallpaper last night.
@kittenypentland Just received notification of a conference on philosophy of self deception. Thought I might like to go but then realized, who am I kidding?
@joegeeknz My fly has broken and now the front of my pants look like a very large vagina.
@Steff_NZ Swollen knee for no apparent reason. Advice? Amputate?
@RyanSproull Anybody else look at old rack torture devices and sort of think about how good it would be for clicking your back?
@lmfbs Is a DIY brazilian a terrible idea, or simply a bad idea?
@thisfog So. Single again. Lock up your cats.
@CasualLex Chinese lantern festival? Meh. Give me a bottle of tequilla and I’ll light up big time. You won’t even need to fight the crowds.

Other people be herp derp
@ChrisKeall Overheard in the newsroom: “The reasons for the suppression are suppressed.”
@allstarangel Dad: what do you call those horses that race? Me: Racehorses? Dad: Yeah that’s it.
@evilkud My brother is telling me about how last night he ate a kilo of butter inbetween 2 slices of bread last night… Godddaaaammmm
@davidfarrier girls trampling each other over reece mastin: you do realise there are boys at your school who are hotter/kinder/better than him, right?
@thejuicery There’s white guilt, and then there’s just-read-Paul-Holmes’-Waitangi-Day-diatribe white guilt.
@TophHooperton Reason why my birthday card from mum didn’t arrive: she addressed it to ’26 Grey Lynn, New Zealand’. Was returned to sender.
@Naly_D My looking at shirtless Ryan Gosling photos was work-related. It wasn’t for the male colleague who stood behind me sucking on a nectartine
@AshleyCnz Zion Wildlife Park should be renamed WhenGoodFamiliesGoBadsville

People of the Internet
@juhasaarinen Some very strange people in my timeline.
@markleggett If you argue with someone on the internet long enough, they’ll eventually make a typo and you’ll win.
@unstatusfactory Please don’t stop tweeting just because you’re having sex.
@amandajaneNZ I love twitter because I can come on and read about the cricket then talk to a guy I like about it as if I had watched the whole thing.
@LachlanForsyth Web comment accusation of conservative bias. Email accusation of liberal bias on same story. This MSM conspiracy stuff is all so confusing.

We got upset about pants
@ryansallanThis lady needs to know, control tights are NOT pants. Bitch, I can see your vagina!
@WriteOnNZ Jeggings/up the duff combo. Noice.
@Robbo_Junior Just saw the most gorgeous, well presented woman walking past. I was jealous until I realised she had bird shit on her pants.

We got upset about politics
@geekboy73 Anyone know if Trevor Mallard has some Radiohead tickets for sale?
@Covlin One thing is for sure: Paula Bennett certainly doesn’t have any friends with benefits.
@jonocabron Does Gerry Brownlee realise you can’t eat roads?

Life hacks
@NanaJ9 I zoom in on photos of people wearing sunglasses. So that I might see something sinister in the reflection.
@bobsyauncle MrsBob: “What’s ‘motorboating’?”. Me: “Pause the video…”

Valentine’s Day
@ErinNoName I was just given a bottle of codeine and a box of tramadol. That’s a valentines day gift, right?
@AliIkram When I hear the Rihanna song “We found Love in a Hopeless Place” it reminds me of meeting my future wife at TVNZ.
@GondwanaHeels I like that my phone didn’t have the word Valentines in predictive so it tried to say happy palenstine day instead

Children are always a feature
@amandagTV3 Nephew has started school. 1st question to young pretty teacher “do you have a boyfriend” then “when is the lunch break”. priorities sorted.
@rosiecd Woken up by Mr 2 combing my hair and arranging Tampons on the nightstand

Things we Do Not Want
@Sidawg2 Imagine having to live with the Harvey Norman voiceover guy.
@TophHooperton Finally got on a bus after 4 went past full, but this driver seems intent on sending me sailing through the windscreen. Tell my fam-
@ChelleNZ Must be looking a bit butch today. Got called ‘young man’ just now at the supermarket. Now eating lamington fairy cakes, plural.
@stevebiddle Here I was thinking Godfrey’s weren’t having a sale this weekend. Then the guy screamed at me on the TV telling me they do have a sale on.
@honorarykiwi That awkward moment when you realise your baby brother is subscribed to (and comments on) a bunch of porn stars on Facebook.
@Stitchpunk “you’ve got a big grey streak in your hair!” *panic* “oh no wait, it’s just cat fur.”
@PaMelville Desperately need coffee. I got offered instant. I feel like a vampire caught in a shaft of sunlight.
@GeneralistAlan Work tomorrow, thinking about punching myself in the head in preparation
@Kiwi_Chatter There’s ‘my leg is cramping’ Brad, ‘I need some sugar’ Brad and ‘I’m getting up at 5am tomorrow’ Brad. Your cycling is hurting the family.

Because he was the only one to ask me where TOTM were (three days late!), and because he has nominated more tweets than anyone, ever, I’m going to declare @vinlew our Tweeter of the Month! But because he’s underage, he gets the bragging rights, and has nominated someone else for the cider.

Congrats @SarawrSmile! Make sure you’re following @oldmoutcider so they can DM you 🙂