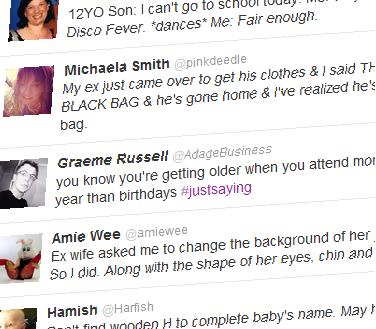 March was the month of the Marmite crisis, some road rules changed, and a Kiwi in London almost got arrested for being in love with his own biceps. Confused? Don’t be: Here are March’s best tweets!

@SpeelyFreaking ‘Lefty loosey, righty tighty’ also works for political leanings.
@xx_MCP Always take a fifty to the movies! Just in case you feel like snacks as well
@AdageBusiness you know you’re getting older when you attend more funerals in a year than birthdays

@robtreacher Starting Sunday, Kiwi motorists will be giving the finger to other turning traffic with the left hand and not the right.
@not_friends General rule: just think less than you currently do at intersections, and you’ll get it right.

@_sarahdee Txt from temp flatty 2 other flatmate last night “don’t worry about the noise you are making, I’m going to take sleeping pill”.

@aivanson Just seen the weirdest thing … Woman driving with beehive in back of SUV. Bees everywhere….
@AaronM_NZ Guy at fish and chip shop just asked for one potato fritter. “Oh and can I get $4 cash out?” Go west Auckland!
@BexieLady #pregnantoversharer told her mother which night she will be babysitting her yet to be born son so she can do an ‘all nighter’ & get wasted.
@Kiwi_Chatter They say “Marijuana and three prescription drugs in her system” like it’s a bad thing.
@jessepeach Taught my parents to use Skype tonight. Then my dad tried to squeeze a pimple on my mother’s face. I really don’t think they get it.
@pikelet Watching my flat mate use a pot as an iron. We’re trag.
@Covlin Awkward that I’ve just had to explain to a guy in his 70s how to access internet porn.
@callumprobable That awkward moment when you see a former work colleague ‘chatting up’ a hooker
@sithompson Overheard from teen girl at cafe in Takapuna: “No, I don’t feel anything for him anymore, but I am crushing on my OTHER cousin hard out.”

@Tarquin_Death Taking Codral “Day & Night” Night tablets… IN THE MORNING. Living on the edge today, people
@NinjaLikesCheez Just shouted ‘look at these guns!’ (meaning my massive biceps) forgetting in on a bus… In London…
@kebabette What’s the medical term for carpet burns on your cheeks?
@egesther Eating outta the pot. One of those nights.
@UseablePizza What happens if you put a stick in a non-stick pan?
@liltoastfairy yes I am tweeting from the shower

The next generation of Kiwis

@melhomer Just walked in on my 5 yr old wrapping his willy in cellotape. Now that’s going to end badly….
@manikpixi 12YO Son: I can’t go to school today. Me: Why not? 12YO: I’ve got Disco Fever. *dances* Me: Fair enough.
@Harfish Can’t find wooden H to complete baby’s name. May have to rename him Oxcixufum

@itcomeswithatoy Giving everyone on Trade Me ‘You is smart, you is kind, you is important’ reviews.
@_AnnyMa Ahahahahahaha International Women’s Day and Supre are both trending in NZ. Ahahahahahahahaha

@evilkud As long as Hamilton exists their will never really be a lack of yeasty spreads in NZ
@DrBrash In 55 minutes I will be in Aotea Square, naked, covered in Marmite, Come rub your toast on me.

@pinkdeedle My ex just came over to get his clothes & I said THEY’RE IN RHE BLACK BAG & he’s gone home & I’ve realized he’s taken the rubbish bag.
@amiewee Ex wife asked me to change the background of her passport photo. So I did. Along with the shape of her eyes, chin and nose. Muwahaha.

I did a random draw this month, and @not_friends got pulled out of the hat* and is our Tweeter of the Month! Congrats, and make sure you’re following @OldMoutCider so they can send you a case of deliciousness 🙂

*may not have been an actual hat