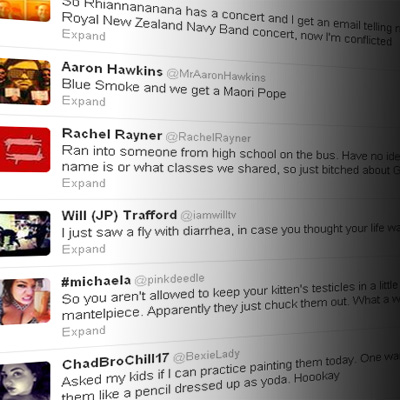 March, and winter is coming. Fortunately for us funny tweeting is under consideration as a sport in both the Winter and Summer Olympics so there was no shortage of material. Census, attempts to alter the space time continuum, Popey smoke and another round of evidence that if nothing else, New Zealand is 100% pure class.

Keep it classy New Zealand
annettle Experiment, for funsies: Can I still get my big toe in my mouth? (Yes!)
‏guywilliamsguy Great to see that Nelson Library still subscribes to FHM magazine.
Wordgirlwriting Need to go get food, but society is all hung up about how I should wear pants when I leave the house.
fuck_lupus I’m 30 and I can’t even find my tits anymore. I could be sitting on them.
Tarasutherland Cabbage rolls. Delicious! Bet I’m going to fart like a brass band all day tomorrow though
Kiwi_Chatter At the ‘Shore to Shore’ fun run. Looks like most North Shore mums have dressed up as ‘Camel-toe Woman’.
ShakefieldCasey That awkward moment when you thought you had nail polish remover & paint a guys nails as a joke annnnd you don’t
Virginiafrankov #urbanlivingdilemma the bathroom door has locked itself shut. do i still drink my full glass of coke?
PolarBearFarm Casually strolling through the motor camp in a tux.

We stood up, got counted, and tweeted ourselves into a stupor in the process
TroyRF I can hold a conservation in Latin about everyday things if they include slaves, Greek merchants, and the eruption of Vesuvius. #census
Yakmoose when filling out your census form.. no one cares that you can speak klingon.
CasualLex Can I Facebook connect this or something and skip filling half the form? #census
Simonemccallum Two vital questions the #Census2013 didn’t ask: (1) Apple or Android (2) Marmite or Vegemite. Could make a big difference to funding choices
Vaughndavis #census tip: make sure you’ve stopped crying about the relationship status question before you start crying about the income question
Unstatusfactory If you’ve been on minimum wage for the last 6 months, you should write in “exploitation” as the main activity of your employer. #census
radiomum How can it take a census to discover my husband and I do not share the same religion?
brendonRS Drinking chamomile & spiced apple tea, with honey to sweeten. Wondering if I should revise my answer to the age question.

The painfully obvious but very astute observation
Manikpixi There is nothing more painful to watch than a 13 year old boy when the internet is down.

Special smoke got in our eyes
L_To The new pope looks 100. Nice succession planning Catholics.
MrAaronHawkins Blue Smoke and we get a Maori Pope

If you know me, you know why this is here but it’s also a very valid point
TophHooperton If a man can’t lip-synch to Celine in the street with arms out and eyes closed in full fake-belt, then what are we fighting for?

This month’s tweet of the month goes to fuck_lupus because word sister. Make sure you’re following Old Mout Cider to collect your prize!

Thanks to Cate for letting me do this and to the people who use the ‘favourite’ function on Twitter to save the funnies and not because they hope brainy boys will look at it and think you’re brainy too. (Seriously, mine are a boring embarrassment). Enjoy the cider and thanks Old Mout.