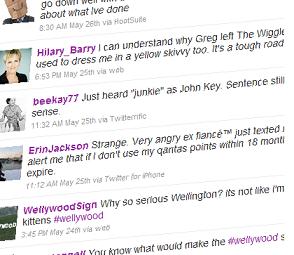 Without any ado, here are your best Kiwi tweets of May 2011…

paulapenfold Misread new follower @bouncingpom as “bouncing porn”, which conjured up images in my mind that aren’t needed at lunchtime on a Tuesday.
TV2BOY Overheard on the 6th Floor. “I’m not asking you because you’re Asian. But do you know anything about Origami?”
jonohutchison Someone broke into gf’s car overnight; stole a bottle of sparkling grape juice. Keeping an eye out for disappointed-looking alcoholics today
RyanSproull NZ has been ranked second most peaceful country in the world, after Iceland. Watch your back, Iceland. We’re coming for you.
beekay77 Just heard “junkie” as John Key. Sentence still made sense.
muffinmum If you are mid 50’s & were in Petone at lunch time with skin tight jeans, top tip: readjust your tackle in the loo rather than middle of cafe
monique_TV3 Oz Woman’s Weekly boasts royal Wedding coverage including “private touching moments”. Perhaps marketing team need to learn about commas.

philwalter I suggested that the current wife be a good mother and make me and the children breakfast. I may have overplayed that hand.
mrbrownsbag So declaring a fake sick day via twitter does NOT go down well with the boss. I’ve suggested I take the day off to think about what I’ve done.
cadetdory Tired. Just turned the light off and then spent several seconds trying to figure out why the room had gone dark.

MoataTamaira Hm. So boyfriend has been invited to The Rapture via Facebook but I have not.
rosiecd Is Rapture happening on a rollout? Or greenwich mean time? Just want to plan my weekend.

Vegrandis Unitard – the garment with the power to make you look like its name!
trisclayton I’d like to sniff Peter Dunne’s hair. I think it would smell of cinnamon and integrity.
pipkeane 6 adults. 3 kids and nobody can work DVD player

Yes, this is my life

ErinJackson Strange. Very angry ex fiancé™ just texted me to alert me that if I don’t use my qantas points within 18 months they expire.
rhysiedarby Busy writing to fans. They haven’t written to me, I’m just taking the first step in hopes of some replies
antsgardiner I just noticed that my block of cheese has teeth marks in it. I guess I got quite drunk last night.

WellywoodSign Why so serious Wellington? Its not like I’m killing kittens
annagconnell You know what would make the wellywood sign even better? Comic sans.